Previous excavations of the research area were conducted in the late 19th or early 20th centuries to expose the remains of the New House to the northeast of the ringwork. These excavations were part of the larger programme of work undertaken by Lord Bolton. Little was known about the extent or purpose of these excavations in this area prior to re-excavation during the 2014 season.

The 2014 team was made up of staff and students from the Univeristies of York and Southampton, members of the Basingstoke Archaeological and Historical Society, and staff and volunteers from Basing House and Hampshire Cultural Trust. Local residents also took part in the excavations. Excavation took place between 21st July and 14th August and an area 15m x 6m was opened over an area of the eastern range of the New House (Area 1 – see figure 1.1 below). The trench was situated in order to expose a wall which would have been external but facing into an enclosed open space. This area was subsequently extended in order to investigate features identified in the original trench (Area 2 – see figure 1.1 below).

Turf removal immediately revealed the upper surface of the wall which ran northwest to southeast through the centre of the trench. Deposits to the west of the wall (what would have been the interior of the building) revealed that this area had been excavated and partially backfilled as part of the original programme of excavations. Topsoil in these areas had a depth of approximately 10cm. Immediately beneath the topsoil compacted layers of debris were exposed (primarily broken brick, mortar and tile) within these deposits were occasional patches of clay-mortar which may be evidence of a surviving floor surface. Once excavated these areas formed a level surface from which the surviving courses of brick protruded by ca12cm. The excavations also revealed a wall running perpendicular to the large wall to the southeast into the interior of the building. This wall is marked on the plan from the Bolton excavations. 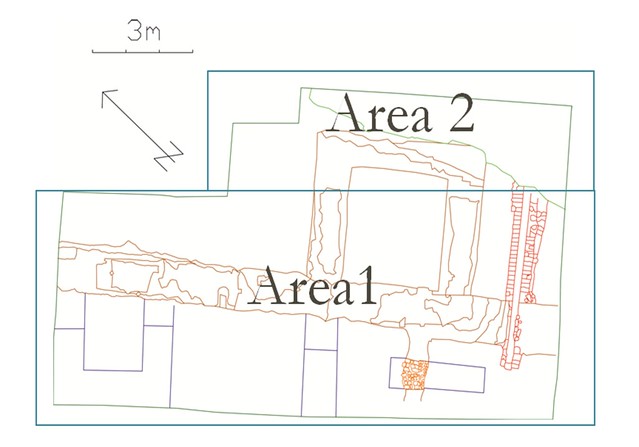 Partial removal of the debris layers revealed that they were ca. 30cm thick and overlaid natural clay into which the foundation of the large NW-SE wall had been cut. Any surviving pre or post demolition deposits in this area had been removed as part of the original 19th/20th Century excavations.

The area to the east of the major wall (see figure 1.2 below) revealed a far more complex picture. The northern part of this area (in the northeastern corner of the trench) contained an area of complex stratigraphy which was largely, if not completely undisturbed during the Bolton excavations. Excavation of this area revealed a series of demolition layers containing a wide variety of building materials including broken window glass and window cames, tile brick and mortar. Materials were often found in concentrations possibly indicating the systematic processing/sorting of materials on site.   These demolition deposits were around 40cm thick in total and overlaid a compacted debris surface not unlike the one which was uncovered on the other side of the wall. No evidence of surviving floor surfaces was uncovered in this area of the trench. The central and eastern parts of the trench revealed two brick structures extending from the major wall into what is likely to have been the courtyard. The most obvious of these comprised a room of around 3mx3m internal dimensions. These walls were not bonded into the brickwork of the major wall and so it would seem to be a later addition. Excavation of the interior space revealed traces of a rammed clay surface which may have been an original floor or preparation surface for a tiled floor. 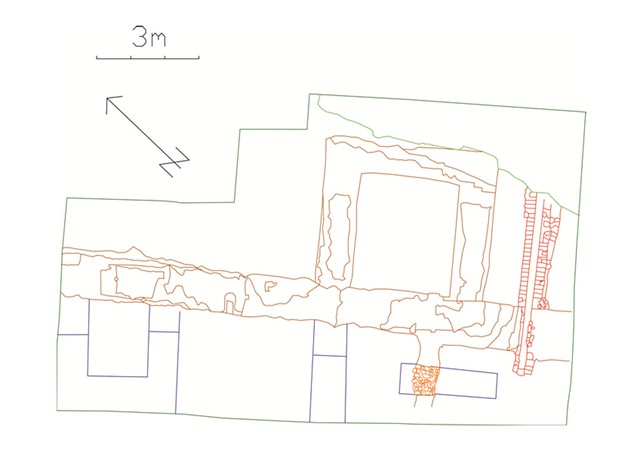 The eastern part of the trench revealed a brick lined channel of ca 15cm width. The channel was cut through the surviving upper surface of the major wall indicating that it was either punched through the wall while the wall was standing or that the channel was constructed after the demolition of the major wall. It runs in the direction of the large circular sump and an inspection of the brick lining of the sump appears to reveal and outflow pipe. At the eastern extent of the excavation the channel was overlaid by the revetment feature described below. Its eastern extent was marked by a moulded arch shaped brick covering the channel. It is not clear whether these bricks would have covered the channel for its entire length. If this is the case they are likely to have been removed during the Bolton excavations.

The eastern part of the trench exposed a substantial cut running from north to south. The cut has partially removed the brickwork from the wall of the square room which runs parallel to the major wall. The eastern extent of the cut is marked by a modern revetment made up of concrete and demolition material (including dressed stone and contiguous sections of bonded brickwork). It seems likely that these features have something to do with the Bolton excavations and/or relatively modern landscaping events but this cannot be confirmed without further investigation taking place.

Read about the recording methodology for 2014

Read about the geophysical survey results from 2014