Week One at the Basing House Excavation

This year, alongside staff from the Universities of Southampton and York and volunteers from Basingstoke Archaeological and Historical Society, we have a fantastic group of undergraduate students from the University of Southampton learning all about archaeological fieldwork. The students are a mixture of first and second years, and are studying degrees in Archaeology or Archaeology with History.

We asked two of the team to put together a blog post summarising the first week on site.

Here is the article that Miriam and Rebecca wrote.

The first week of the excavation for the 2014 season has been completed, revealing an array of interesting finds and leaving us excited for the weeks to come.

By the second day all de-turfing was finished exposing a rough idea to the shape of the new house as masonry emerged. 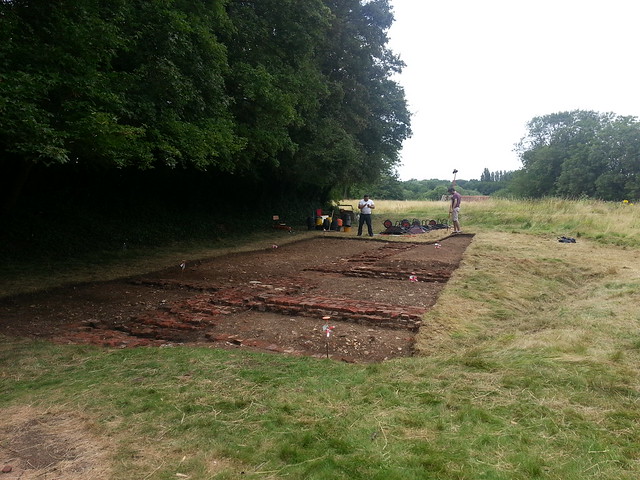 The trench on day two, after super speedy de-turfing.

The third day consisted of removing the topsoil off of the context below as well as starting the clean-up of some of the walls in the south-east wing of the trench. The major discovery of the day was the emergence of a drainage culvert leading eastwards out of the trench to a nearby brick lined pit. This has allowed early suggestions as to purpose of the uncovered rooms; it may have been used for menial tasks that would have required easy access to disposal facilities. 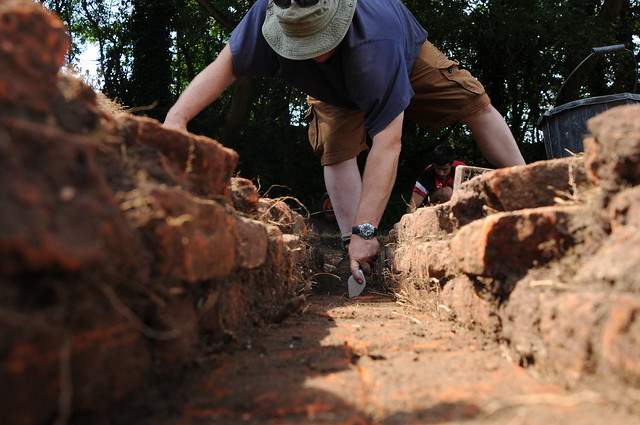 Dom troweling out the in-fill from the drain. 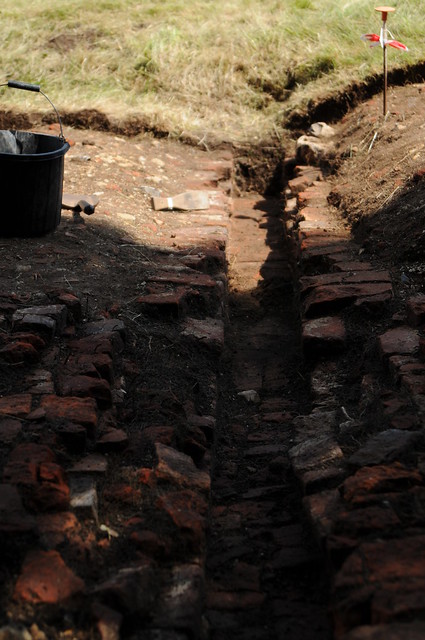 Looking from west to east along the drain.

The trimming back of the overgrowth that was adjacent to the bank also revealed the external wall of the new house which the landowner, Lord Bolton, had previously excavated in the late nineteenth century.

There has been a wide range of finds during this first week, we spoke to our finds specialist Jude Jones, who had this to say:

“We have uncovered a lot of roof tiles during the first week of excavation, the quantity tells us all sorts of things. The nature of the tile, such as the difference of inclusions indicates that there were at least three separate tiles suppliers.

The large size of the roof tiles suggests that the walls of the house must have been very solidly built in order to support a heavy roof, this also helps us to understand how many stories the building may have had. All the ceramic building material finds are diagnostic of the part of the new house we are investigating.

The masonry, particularly the window mouldings and fittings are particularly exciting, as from this we can see the transitional stages of the gothic/medieval styles into the Renaissance. Although some of the window mouldings found have a foliate style, which points towards medieval times, the leaf that was used was an Acanthus and this is more redolent of the classical influences of the Renaissance”. 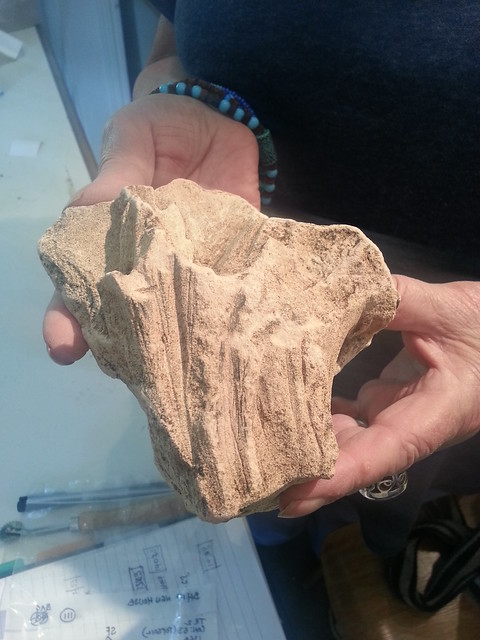 Jude shows some of the masonry that has come out of the top layer of soil just inches under the turf.

During the third and fourth day’s further removal of the topsoil using mattocks (similar tools to pick axes) and trowels uncovered compact rubble consisting flint and ceramic building material across a majority of the site. Whether this context is coherent throughout the trench, is a question we are still yet to answer. Yvonne Marshall of the University of Southampton commented on the perplexing nature of these contexts:

“The first thing that struck me was how coherent the archaeology was, it’s ideal for first year excavations because there are really strong, clear features. However, the stratigraphy isn’t as straightforward as it first looks: is the compact surface seen in the trench the same throughout? Is the house one singular context, or a whole series of different time periods and constructions?” 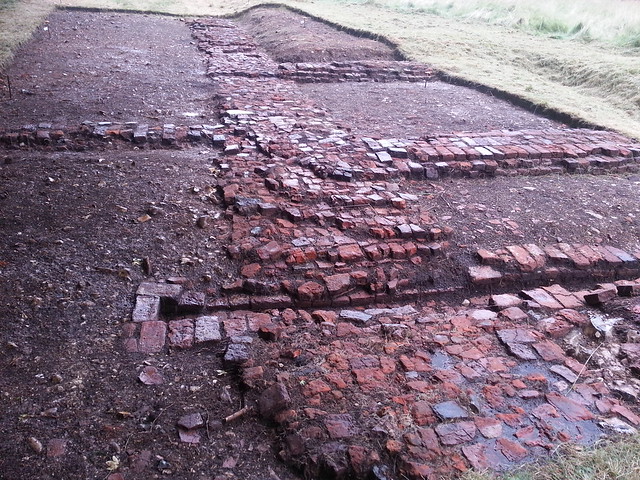 Toward the end of the week the task of planning our first single context began, this included recording the outline of walls and any obvious ditches and banks within the trench. On Tuesdays and Thursdays, Chris Elmer runs special activities to entice visitors to this otherwise unappreciated treasure. This has been a great opportunity for students to get involved in public engagement, whilst giving children the chance to experience real archaeological practices. Richard who took part in the first education day at Basing House enlightened as with his experience:

“The public engagement aspect of the project, for example the dig pits, gives a different perspective to archaeology, as I found it was an effective way to convey information to all ages. It’s mostly aimed to kids but parents have also been finding it very interesting and highly enjoyable.”

Other comments about the excavation so far:

“It’s been a lot easier than last year. The soil is softer and we’re not re-excavating box trenches so it’s been much more pleasant to work with. I’m quite torn because last year it enabled us to learn a lot about differentiating soil, whereas this year the focus is more about focusing on the walls and actual archaeology.”

— Jamie, second year Archaeology student at the University of Southampton.

“Excellent! I’m more of a Roman and prehistoric man but I am thoroughly enjoying this.”

And a final closing statement from one of the students, Tilly: 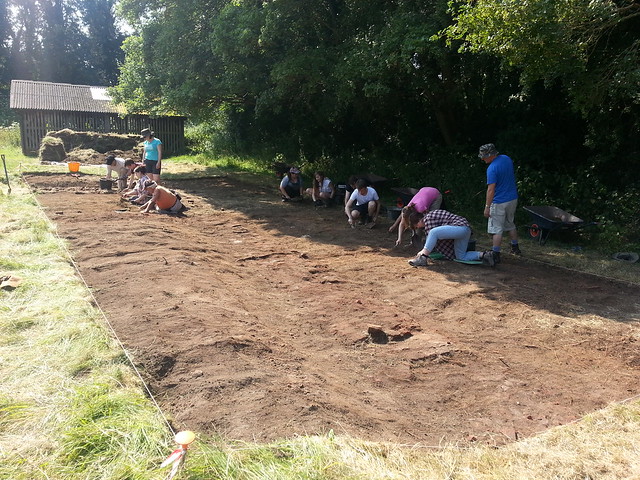 Day two in the trench. You can just see the walls coming up. 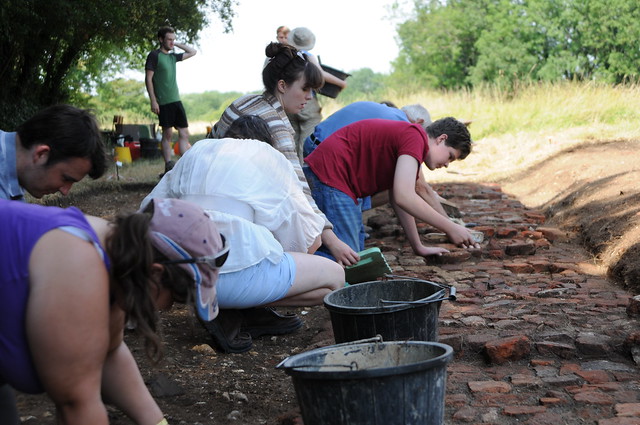 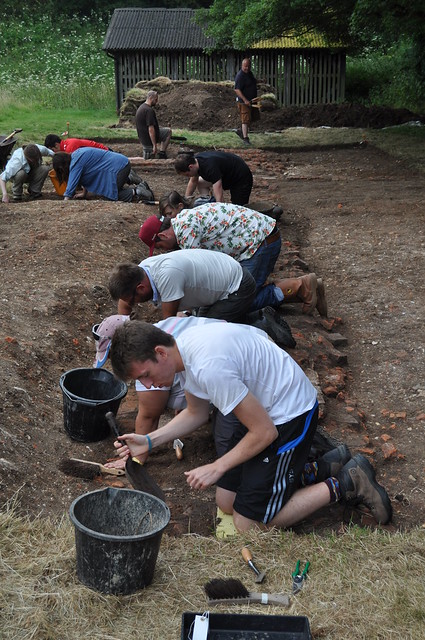 Cleaning the walls on Saturday in preparation for planning. 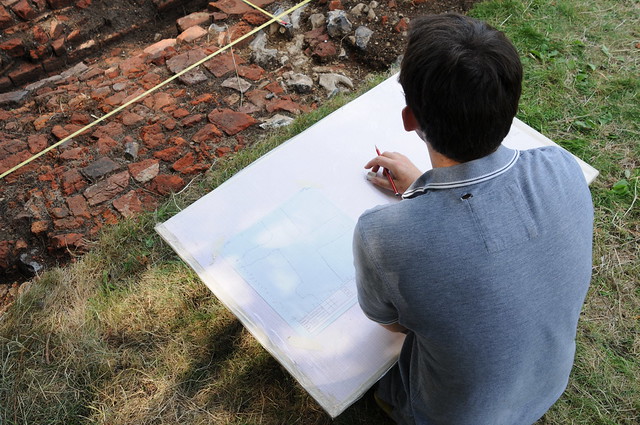 Elliot planning the southern end of the trench. 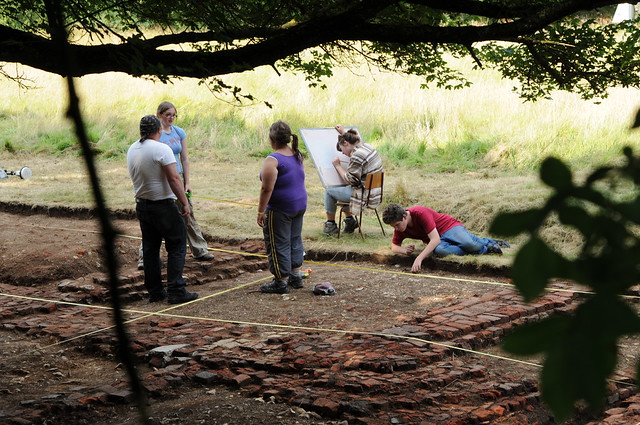 Rebecca, Tilly, Dan, Emma and Alex planning the central eastern side of the trench on Saturday. 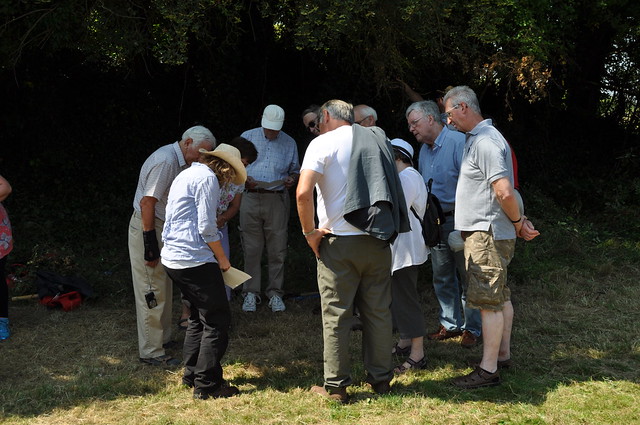 We’ve been giving lots of tours of the trench. Nicole shows the the trench location on a print out of the geophysical results from last year’s survey. 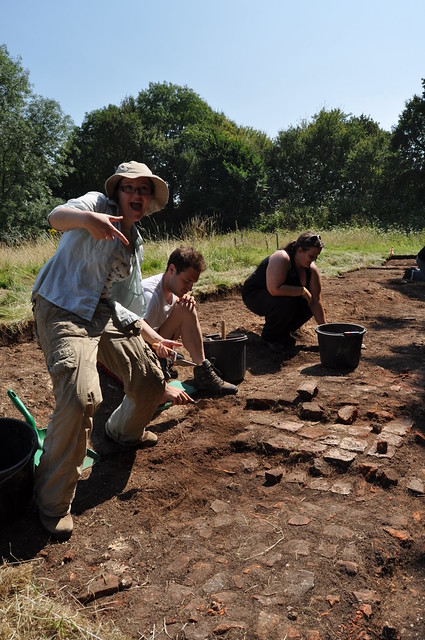 Tilly: unable to resist a photobomb. 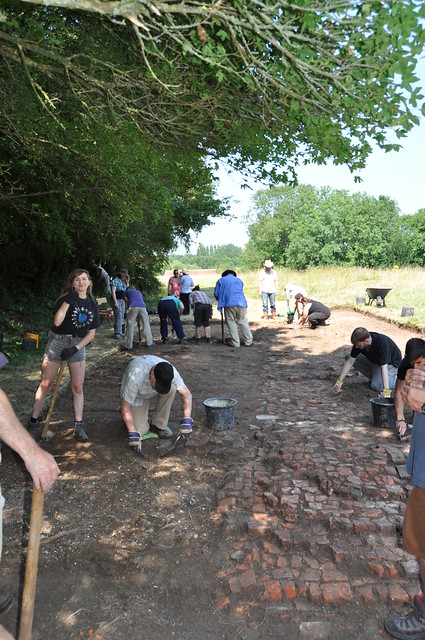 Another photobomb. But also a great view of the trench mid-week. 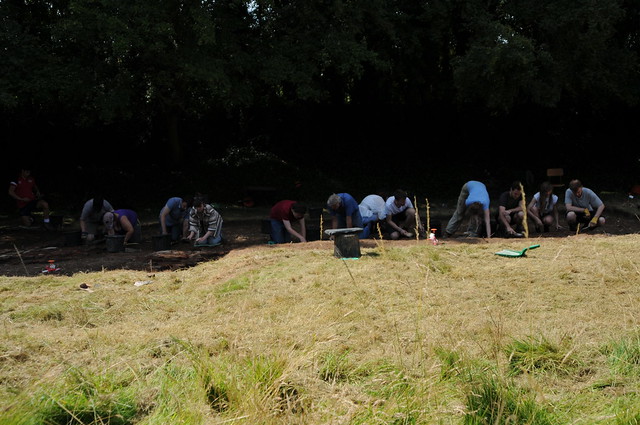 There is nothing more wonderful than a long line of archaeologists, deep in concentration. 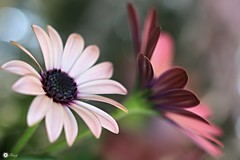